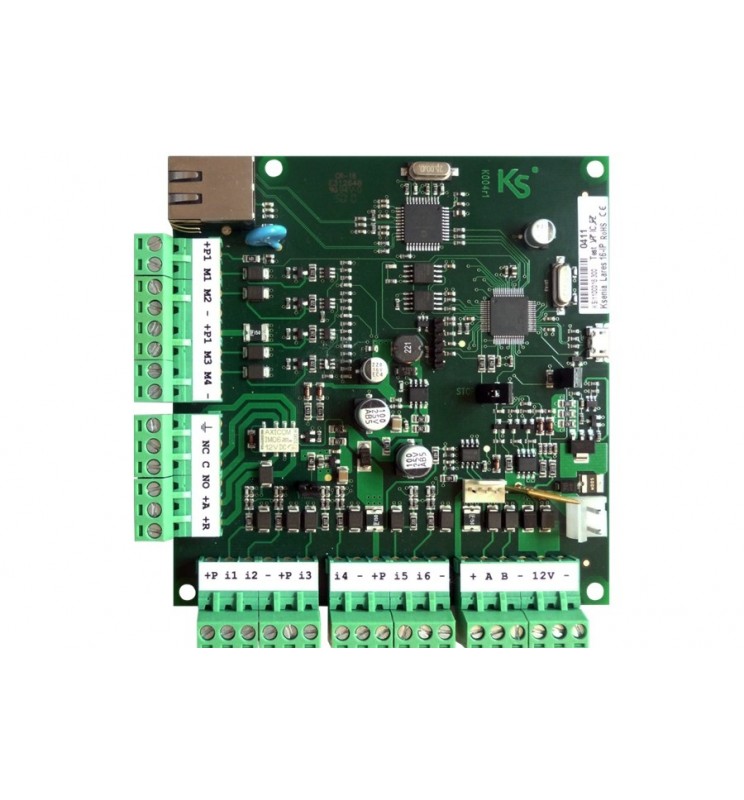 Each control panel has 6 programmable inputs, 4 terminals configurable as inputs or outputs and a connector against opening and removal from the wall. Depending on the model, the number of inputs can reach 128, thanks to auxi expansion modules or the ergo keypads for wired zones or wireless duo transceivers. Each input is programmable: 7 types of balancing (NC, NA, EOL, 2EOL, 3EOL, customized), direct connection of shutter or inertial contacts, 24h, immediate, delayed input and output, input path, command (inclusion or exclusion of partitions, call blocking, alarm reset) and many other functions. Finally, auxi expansion modules allow up to 40 analog inputs 0 - 10V.

The control panel board has a double exchange relè output, programmable by 1 A supervised and of 4 outputs of 500mA OC. Depending on the model, the number of outputs can reach 128 with the auxi / auxi relè expansion modules or the ergo keypads. Each output is programmable: polarity (normally open or closed); operation (bistable or monostable); activation times (ON and OFF time). The outputs can be freely associated with control panel events or manually controlled by the keypad, proximity reader or remotely. Finally, the auxi expansion modules allow up to 40 analog outputs 0 - 10V 20mA.

Each zone can be freely associated with a partition to simplify its management; depending on the model, up to 20 partitions are available with relative entry modes and entry, exit, warning and patrol times.

The Ethernet interface for managing the control panel from anywhere in the world via internet is already integrated on the panel. The system is protected by a triple security: password, encrypted protocol and the possibility to disable remote access or limit its functionality. In addition, the system is able to send e-mails, synchronize the clock with NTP protocol and send events to televisions centers via the modern CID and SIA level 3 over IP.

Up to 400 separate voice messages can be recorded on the control panel for 700 seconds of recording, for warning in case of alarm or failure (with customized message) or for remote operations via voice mail. The voice messages are then managed by gemino BUS (if sent via GSM), pontis (via PSTN) or reproduced locally on the ergo keypads. The recording is in 3 different modes: from the PC microphone, importing a wave file or using two text-to-speech (TTS) speech synthesis engines. The TTS engines are both available through the programming software basis: one is free, the second one is of excellent quality thanks to Loquendo libraries. (*) it is issued by a “one-off” fee license.

On the IP versions of lares control panel, cameras with ONVIF protocol (Open Network Video Interfaces Forum) can be integrated without additional cards or hardware.